Living in a house “off-the-grid” sounds a bit like Henry David Thoreau’s Life in the Woods. In this ever-increasing age of digital interconnectedness, the thought of not being connected to a central electrical grid is bizarre, and for some, downright impossible to comprehend. However, green homes are not without electricity, nor are they too far removed from the rest of society. Green homes, as defined by JD Lara on offthegridnews.com, are “dwellings that use resources from the earth in such a way that if you put them back into the surroundings, they wouldn’t cause any harm. Green building is often associated with sustainable architecture, which seeks to minimize the negative impact of buildings on the environment by maximizing energy, space and material efficiency, while minimizing their use so that the needs of future generations won’t be compromised” (https://www.offthegridnews.com/how-to-2/how-to-build-a-dirt-cheap-off-grid-house/).

Green homes do not look that much different from regular homes, except for maybe the obvious photovoltaic (PV) cells on the roof, and many are actually beautiful in a natural, sophisticated way. These homes have multiple features that qualify them as green homes. They use either solar, wind or geothermal power, and they are designed in such a way to take advantage of passive heating and cooling.  According to home-builder and Ecohomes.net editor Mike Reynolds, “a house with 60 percent of its windows facing south (passive solar) may have its heating requirements reduced by as much as 25 percent for virtually no cost” (https://www.offthegridnews.com/how-to-2/how-to-build-a-dirt-cheap-off-grid-house/).

Another feature of green homes is their economical use of water. Greywater, or wastewater from bathing, washing dishes, bathroom sinks, and washing machines, can be used to flush toilets, wash cars, or after being treated, to water plants. Collecting rain water from roofs and gutters is also a good way to make a home green (https://www.offthegridnews.com/how-to-2/how-to-build-a-dirt-cheap-off-grid-house/). Using graywater or collected rain water reduces the demand for fresh clean water for carrying out tasks that don’t necessarily need it.  One can also use drought-tolerant, indigenous plants for landscaping to reduce the impact on the natural environment surrounding one’s home. 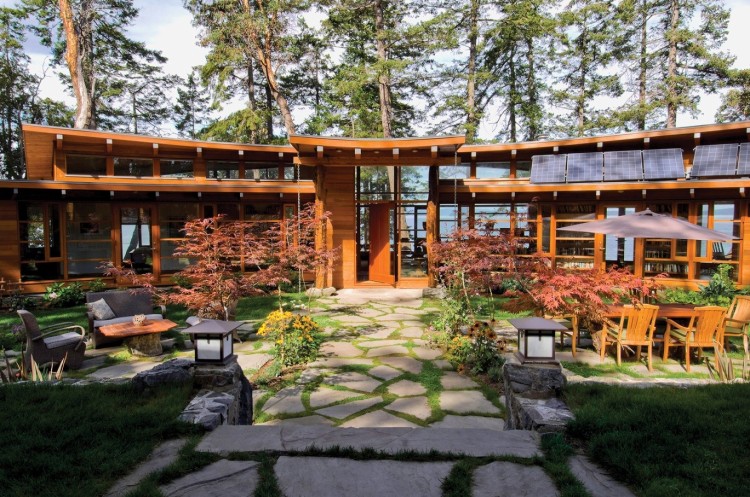 Off-the-grid homeowners have a much stricter energy budget than owners of homes connected to the central electrical grid. Off-grid electricity is more expensive —about $0.50 to $1.00 per kWh (https://www.greenbuildingadvisor.com/article/how-to-design-an-off-grid-house). Although the photovoltaic modules are relatively cheap themselves, batteries and gas-powered generators (or propane-fired generators) are expensive. Those who live off the grid need batteries and generators for when the sun isn’t shining.

However, during certain sunnier seasons, off-grid homeowners are likely to have an energy surplus. For example, in Vermont, “a 1-kW PV system that produces 48 kWh of electricity in the month of December will produce three times as much electricity (145 kWh) in the month of May. If weather forecasters predict three days of sunny weather in May or June, you can plug in extra hairdryers, do several loads of laundry, and vacuum the house, but during a snowstorm in the middle of December you’ve got to be careful about energy use. That’s when you will be using your broom instead of your vacuum cleaner” (https://www.greenbuildingadvisor.com/article/how-to-design-an-off-grid-house). Alternatives to a PV system include a micro-hydro system or a wind turbine, but by far the most common way to generate off-grid electricity is with a PV system.

Find green homes for sale across the US.

For sustainable building materials to build your own green home: https://www.offthegridnews.com/how-to-2/how-to-build-a-dirt-cheap-off-grid-house/